In 2007 I fulfilled a long time dream of mine: visit Antarctica. In style as well: with Bark Europa, a former German lightship from 1911.  I’ve added the logbook entries/website contributions I wrote onboard. In English of course, since that is the main language on board this Dutch tallship. 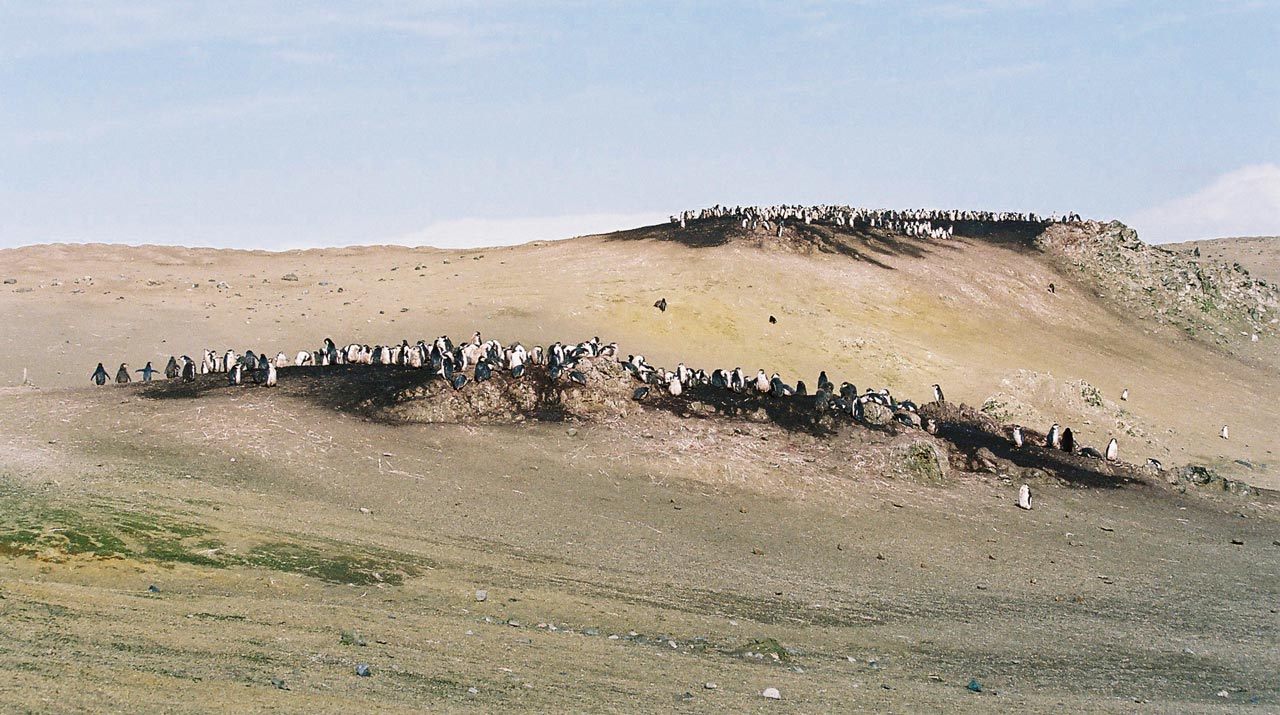 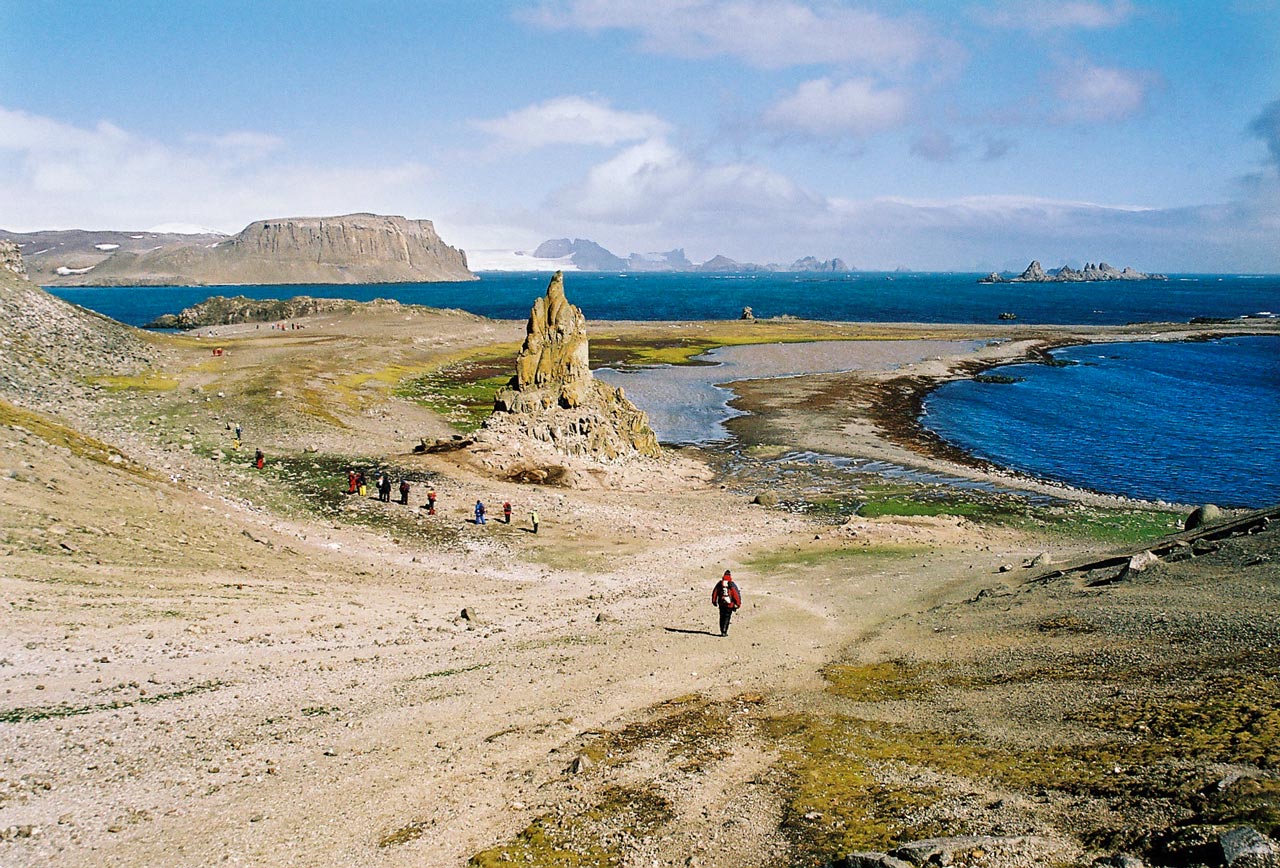 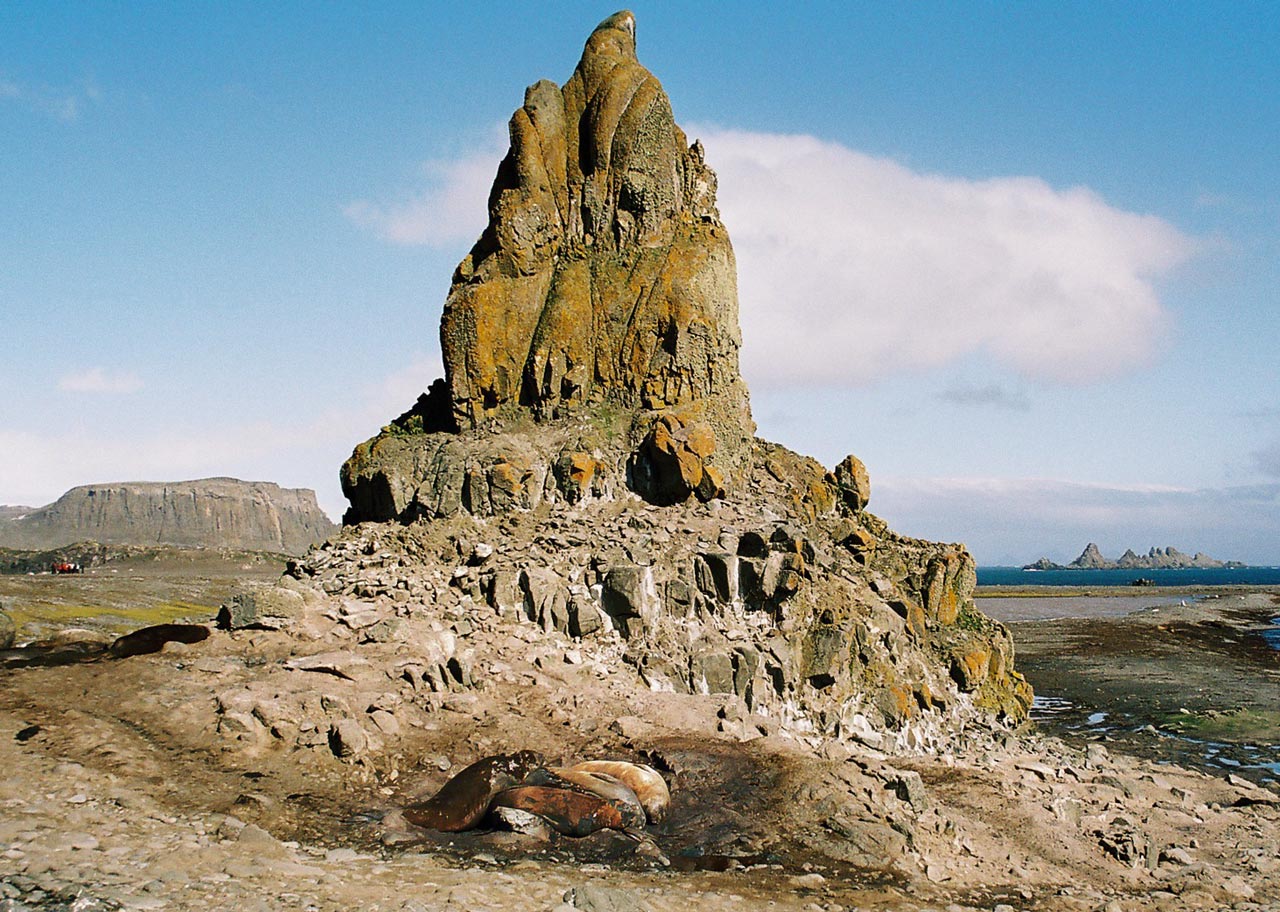 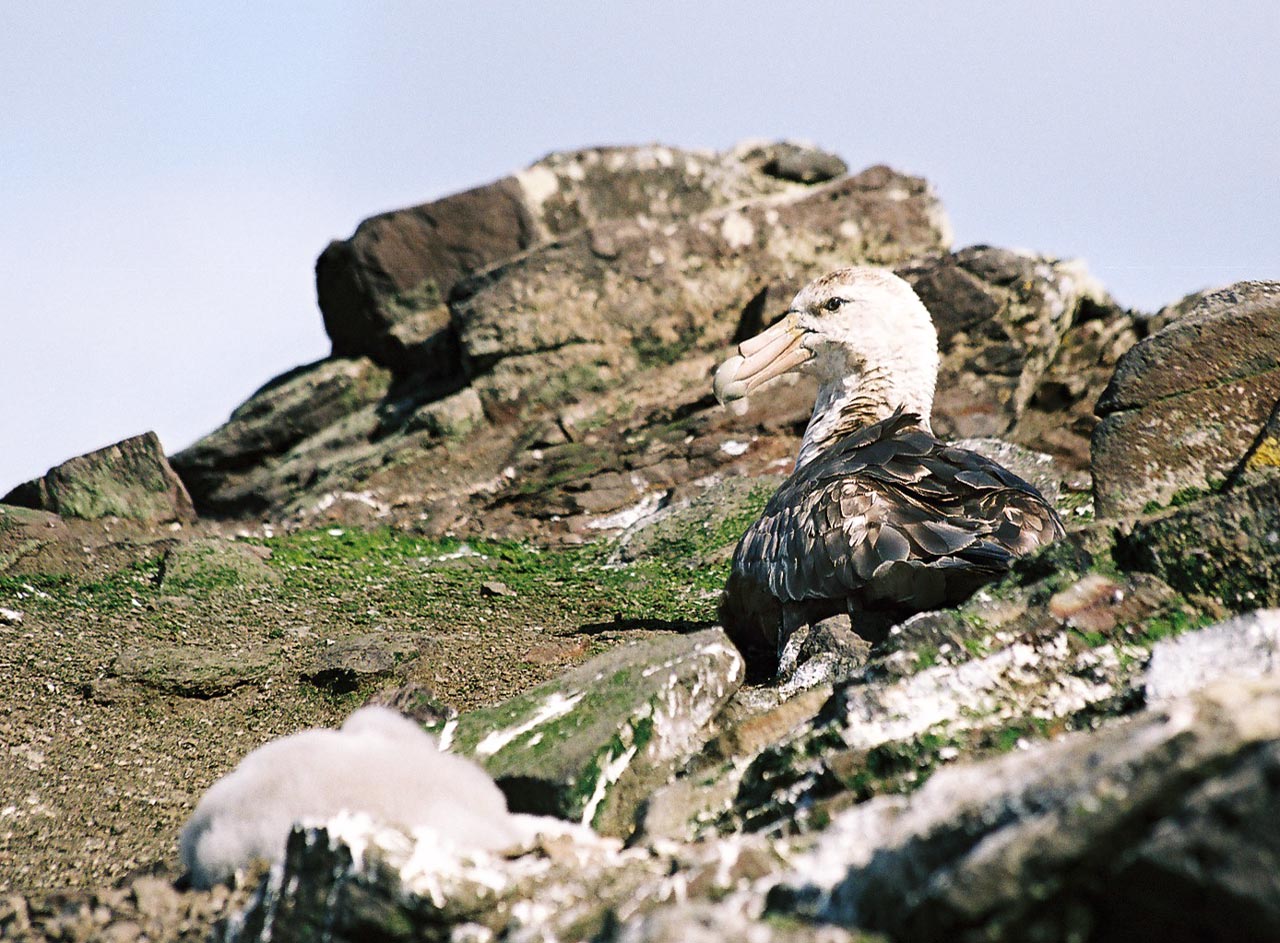 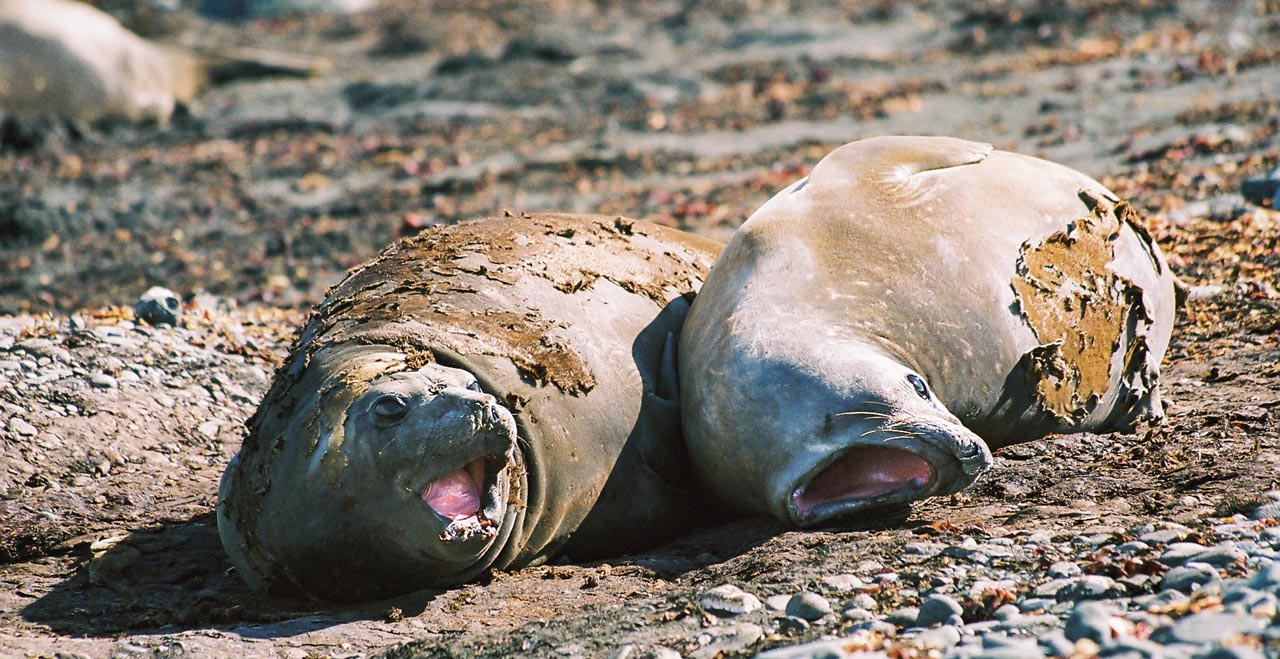 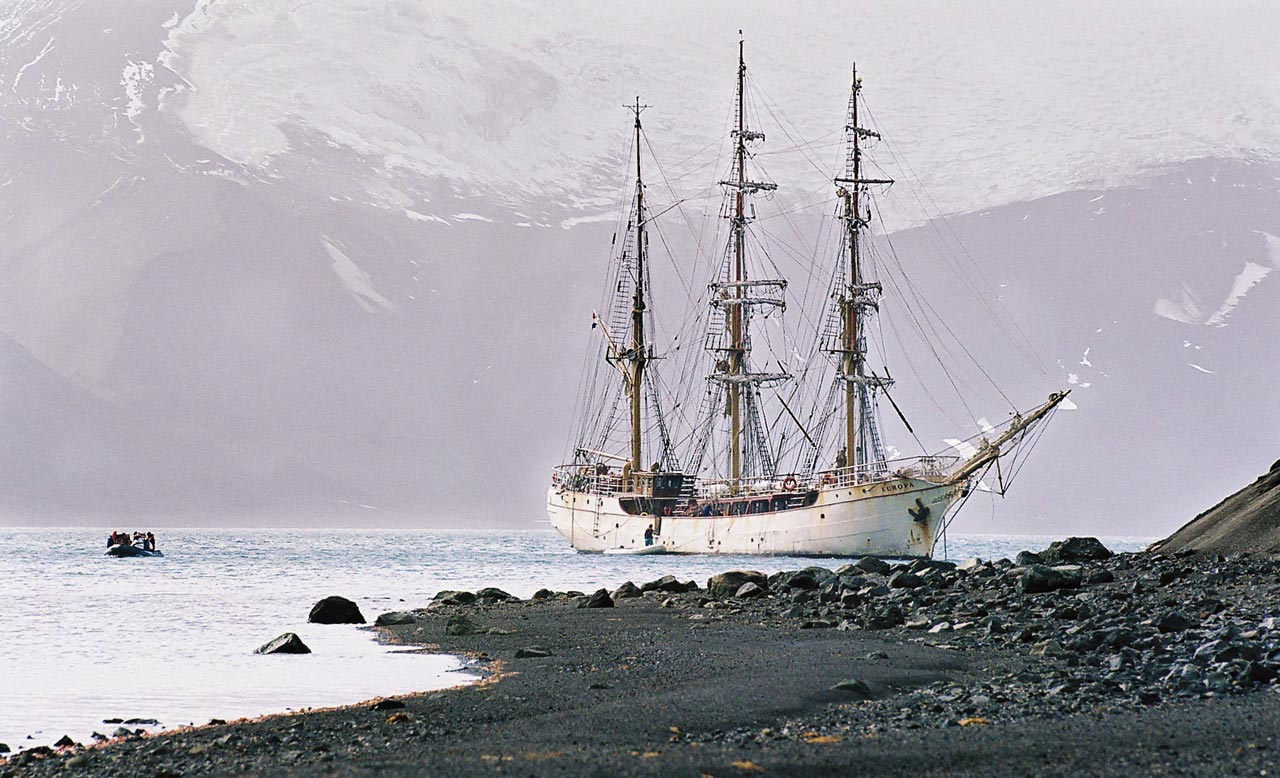 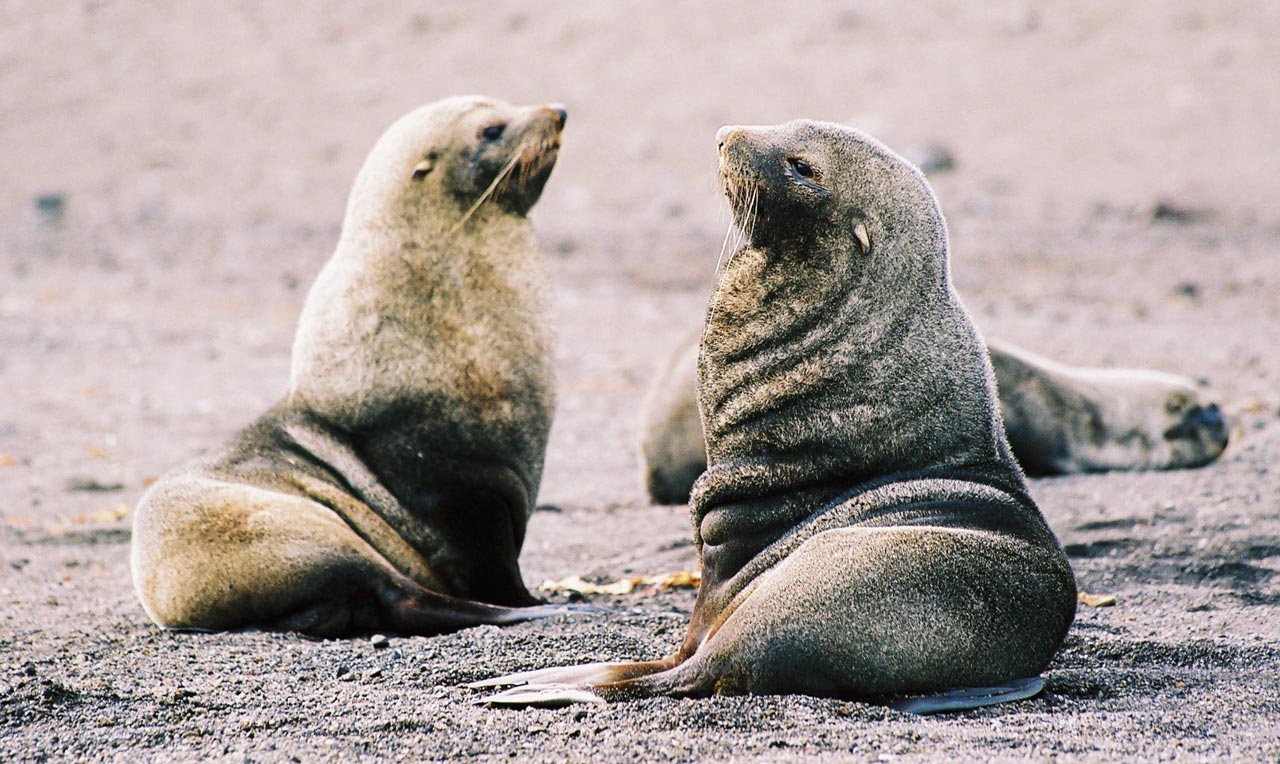 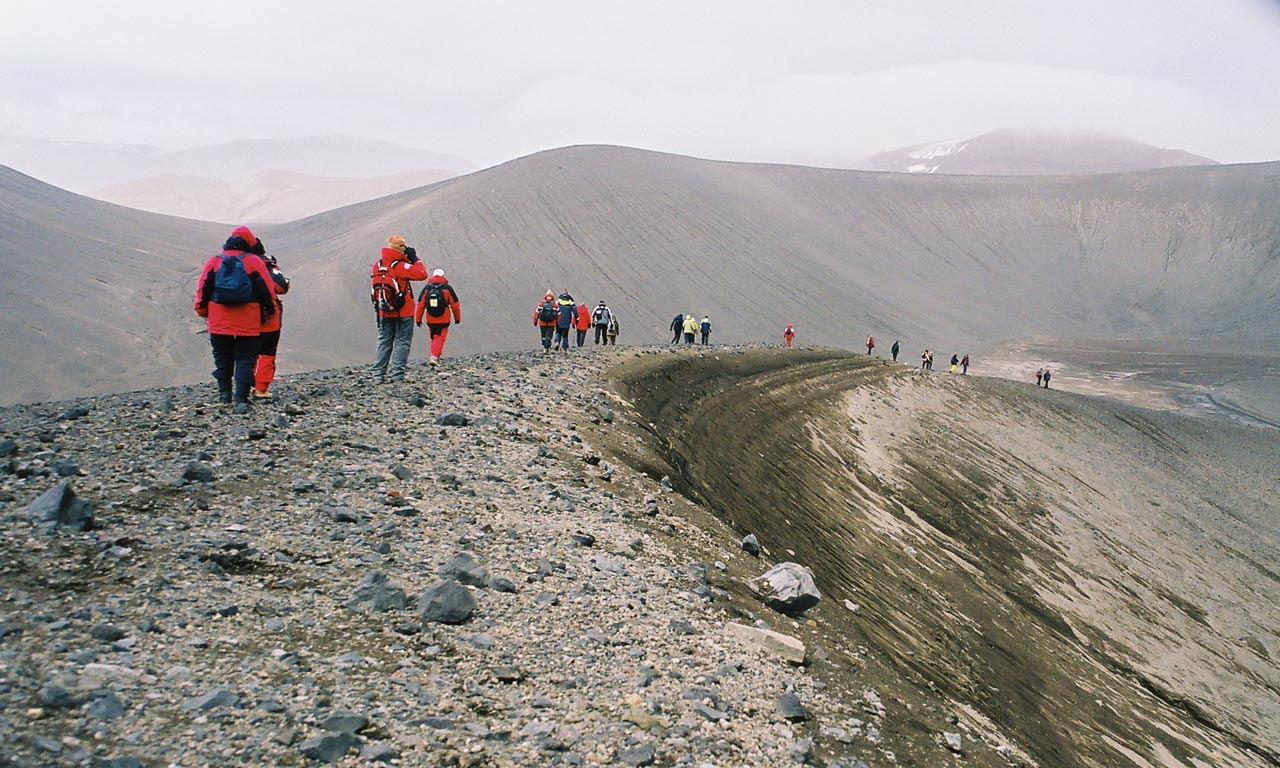 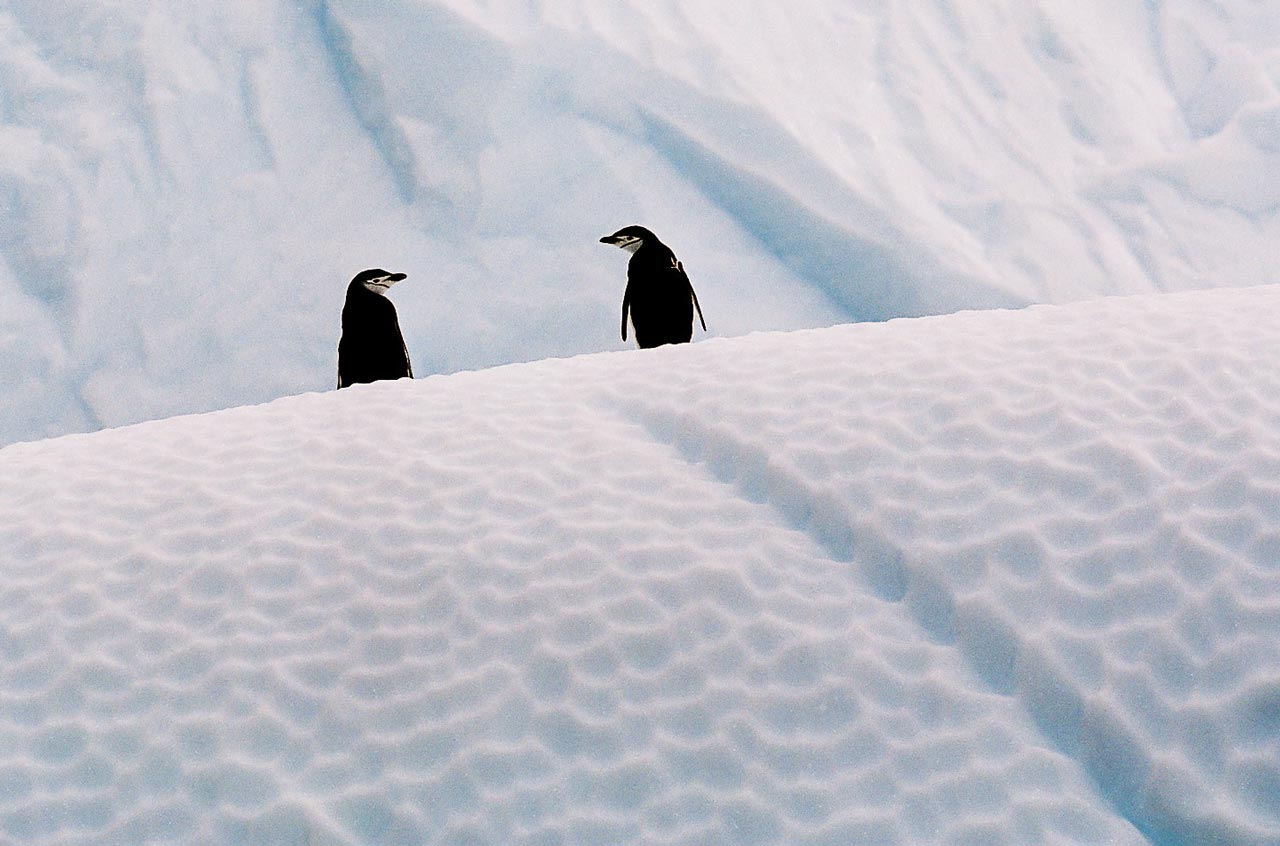 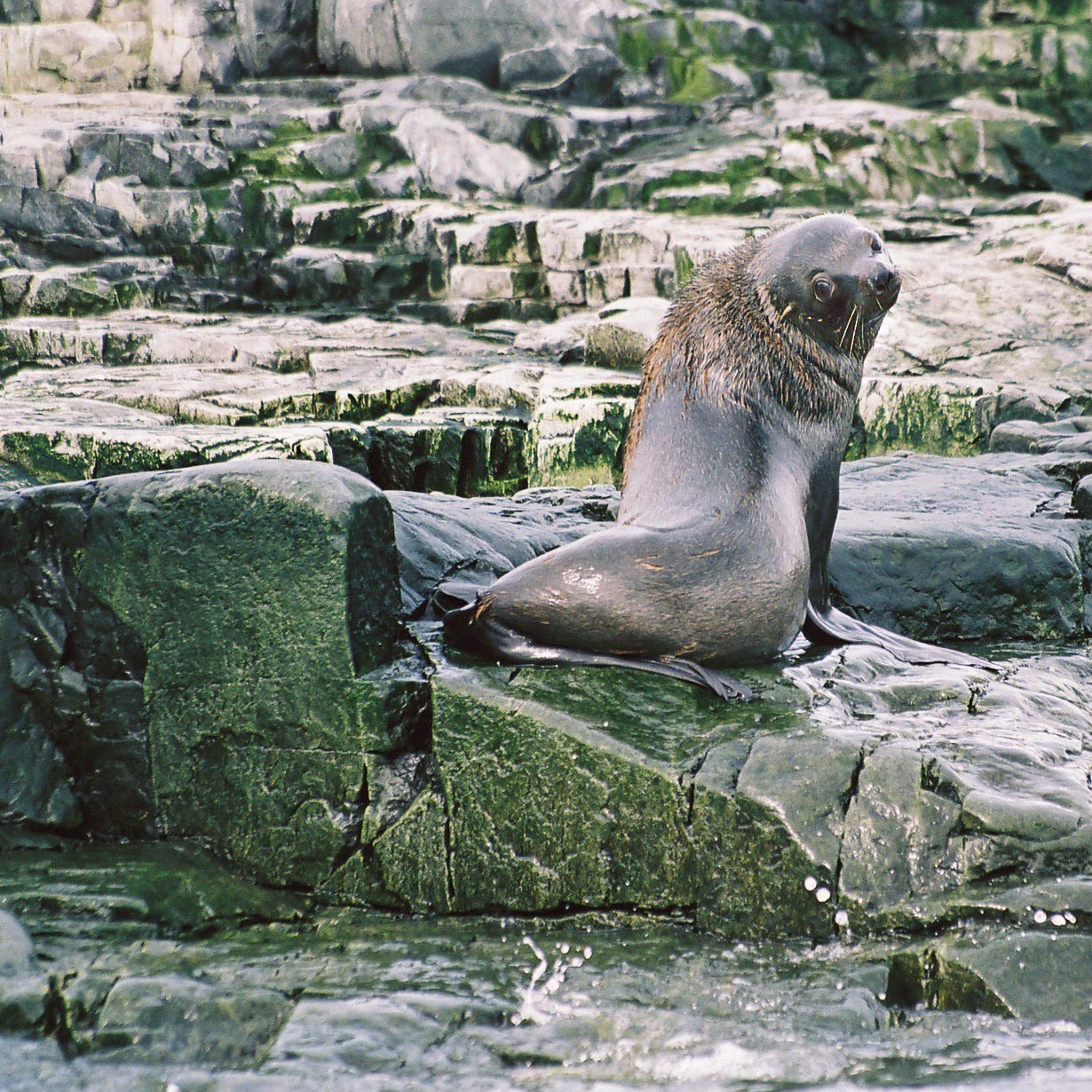 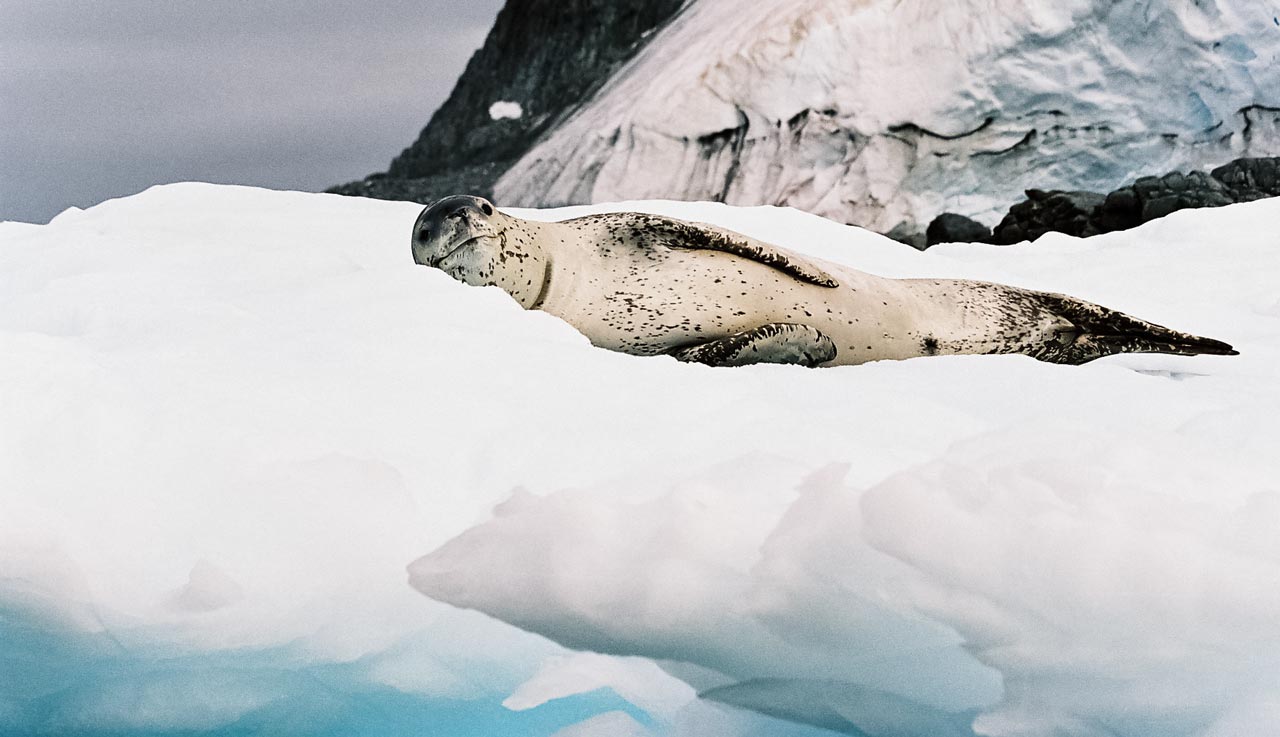 It’s a funny thing, but we have the tendency to interpret animal behaviour as if we’re dealing with fellow men – we just can’t help it. It’s exactly this, which has made Hollywood zillions of dollars. Whether it’s a mouse, a duck, a coral fish or some zoo animals, they get mad, are happy, suffer, or fall in love as if they were human beings. Hell, they even talk like we do!

Here in the Deep South it’s impossible not to think that way towards some animals. So when you crouch down on a smelly beach and a chinstrap or gentoo penguin stumbles towards you, flippers outstretched, we’re utterly endeared; it’s really glad to see us! The clumsy bird cocks it’s head, looks at you, and even moves a few steps closer. We picture it thinking: “Hey there huge funny looking bird. Did you come all this way to visit me and my family? That’s just grand. Say, how do you keep your red feathers nice and… Oh blast!” And off it shoots, as its chick is chasing it and begging it to cough up some more of that delicious seafood vomit. They run after one another down the beach in an act of synchronized slapstick that would make Laurel & Hardy jealous.

But out here there are animals on which it just seems impossible to project happy, fluffy, sweet, human-like qualities. When we were manoeuvring our little Zodiac one day around beautifully sculpted icebergs and we saw a flat, bloodstained floe, we naturally went closer to inspect. It just looked and smelled like leopard seal territory. Having arrived at the small berg-rimmed enclosure, we were startled to look straight into the eyes of one of these predators up close. Or rather: it was staring directly at us. Its huge head, which remind you both of a reptile and a hyena, dived under only to resurface even closer to the Zodiac. This animal didn’t behave as if it was just feeling threatened in its territory. This animal was simply seeing five pieces of meat in a little bitable inflatable. Alert steering took us quickly out of the danger zone – heart rate slightly higher than usual.

Upon landing in Neko Harbour a couple of days later another one of these creatures lay lazily on a floe nearby the ship. As we were about to embark the Zodiacs it slid into the water and started chasing one of the boats and getting closer and closer all the time. At one moment all that prevented teeth marks in the Zodiac – or possibly worse – was the use of a peddle as a weapon.

I always thought leopard seals were not that different from ‘normal’ seals. But after these encounters one feeling sticks: the leopard seals’ menacing black eyes saw us a prey, and that was – at least for me – a first. It looked at us and thought: “Yummy! Human snacks!!” But then again: that’s probably just silly me thinking the animal has thoughts like that… 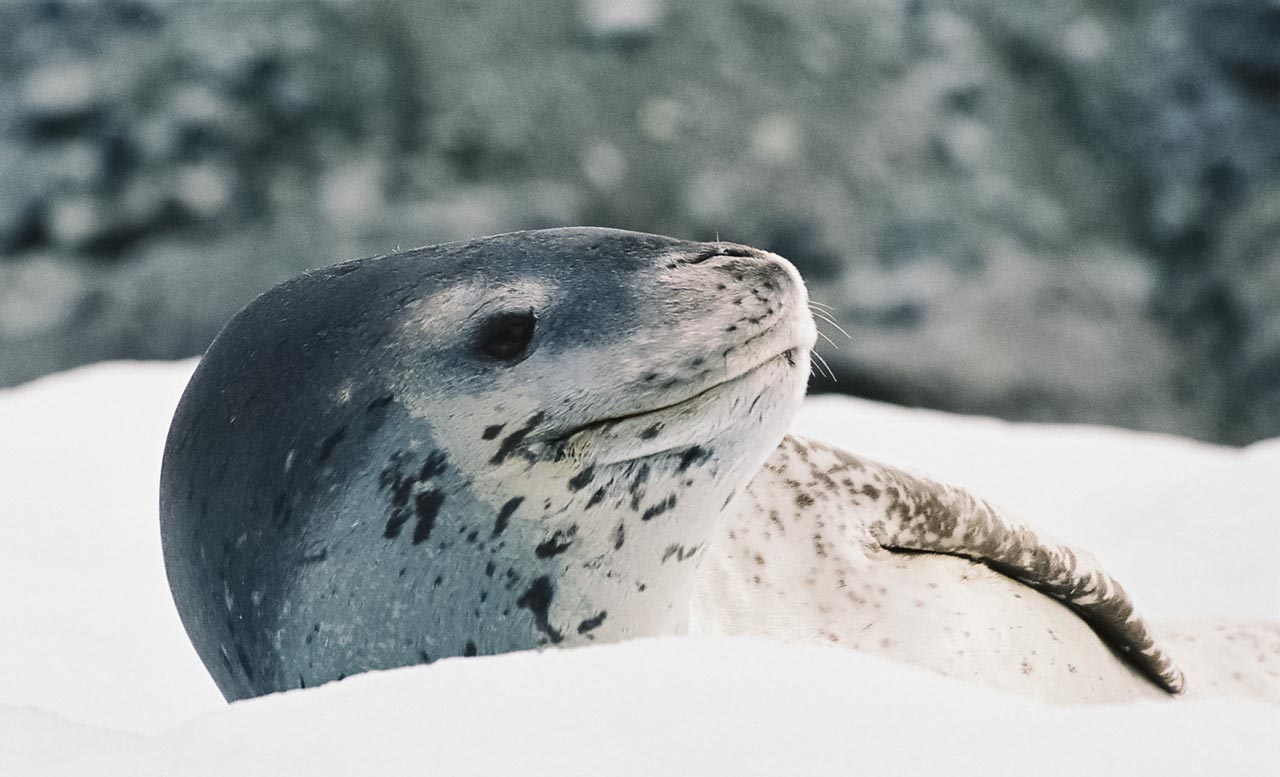 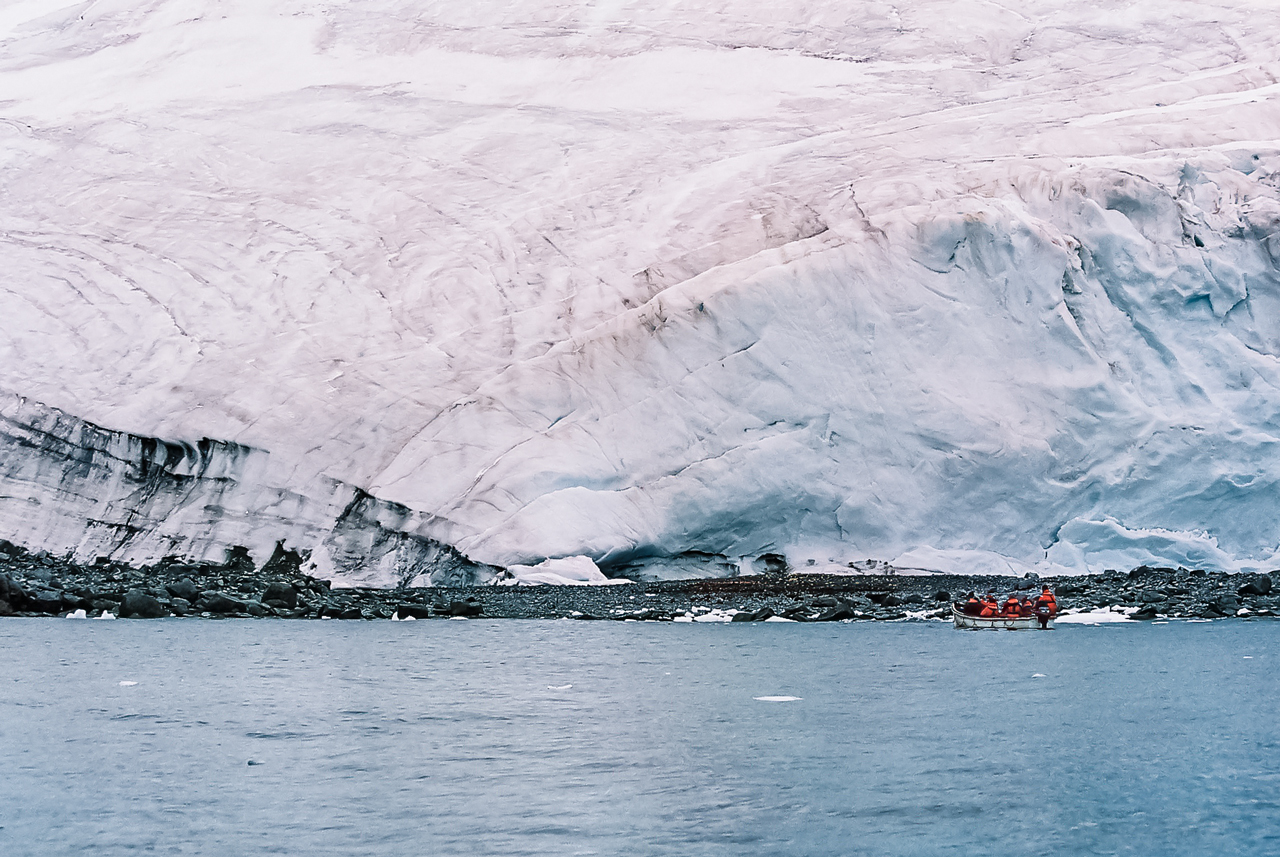 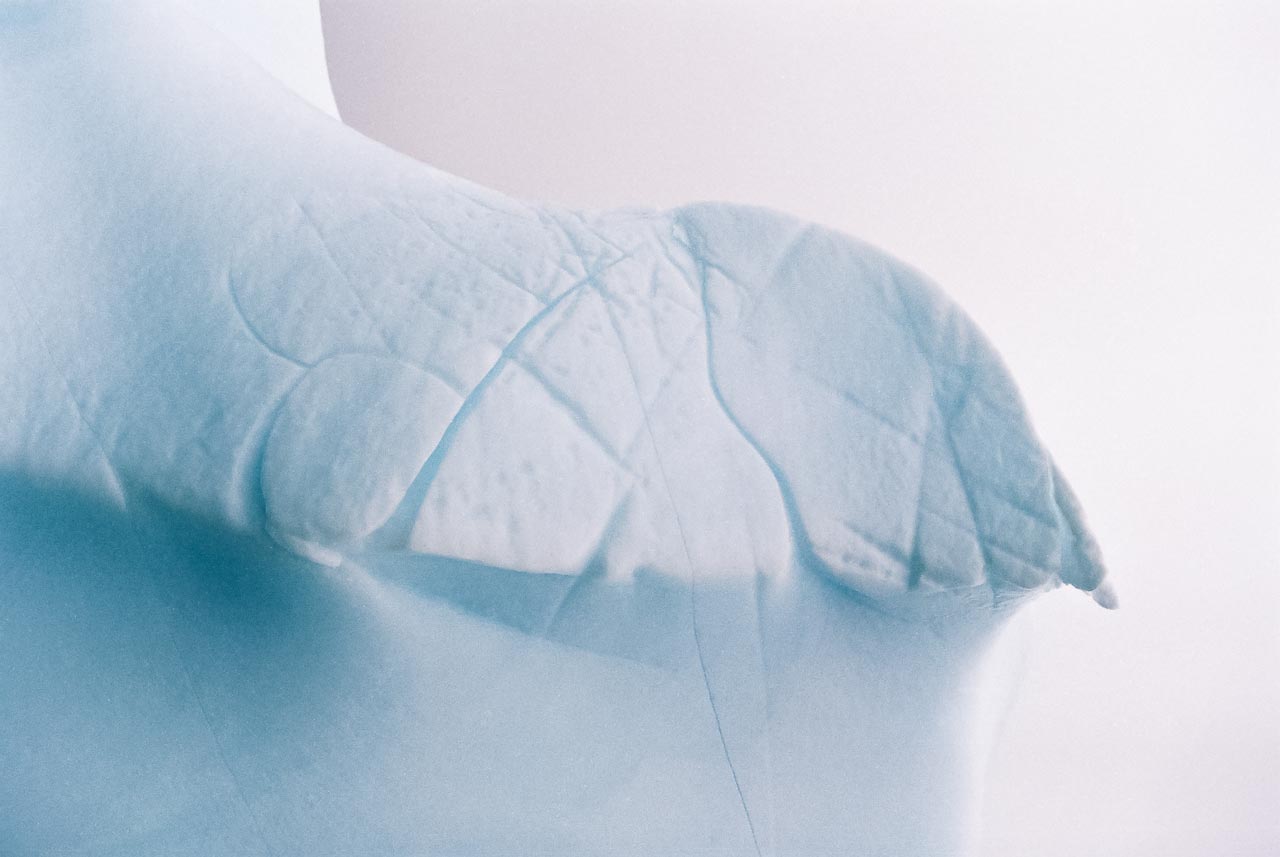 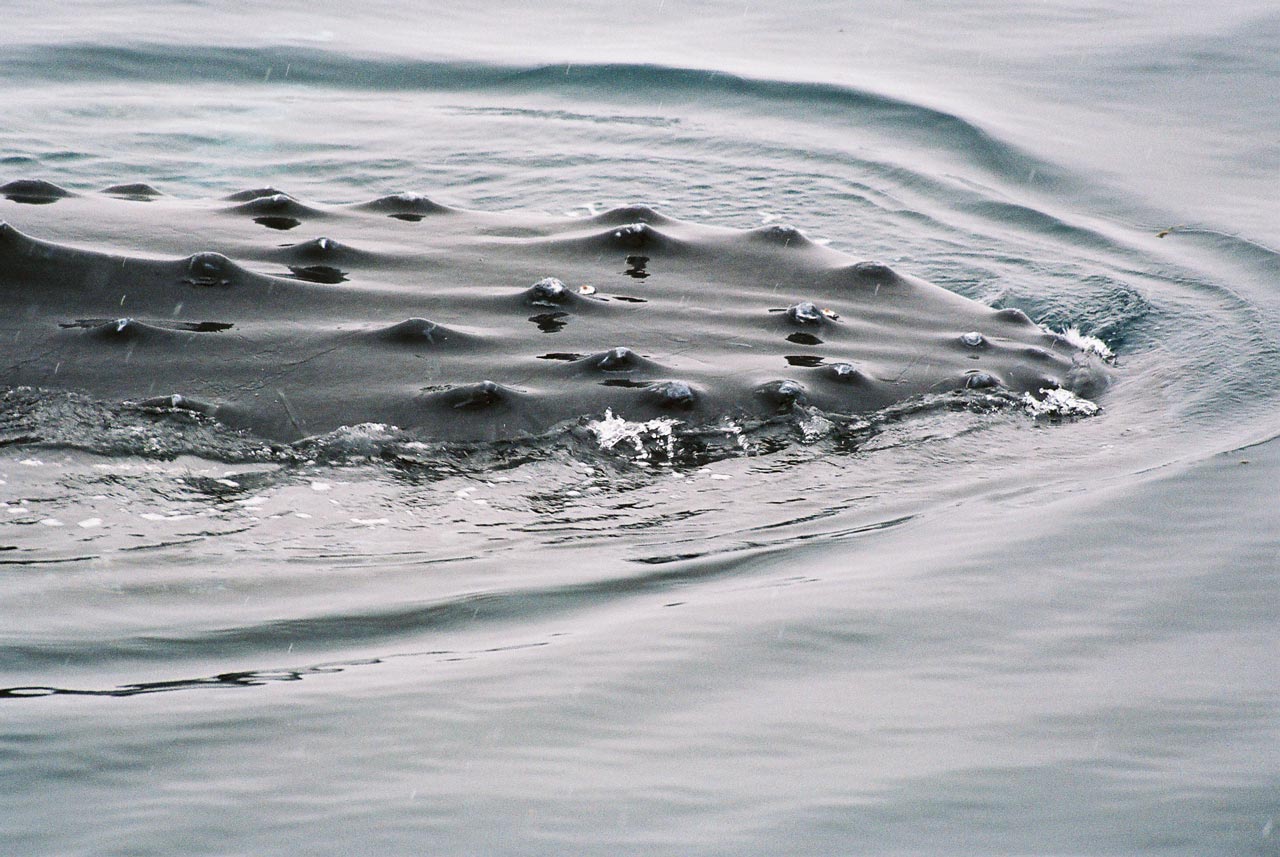 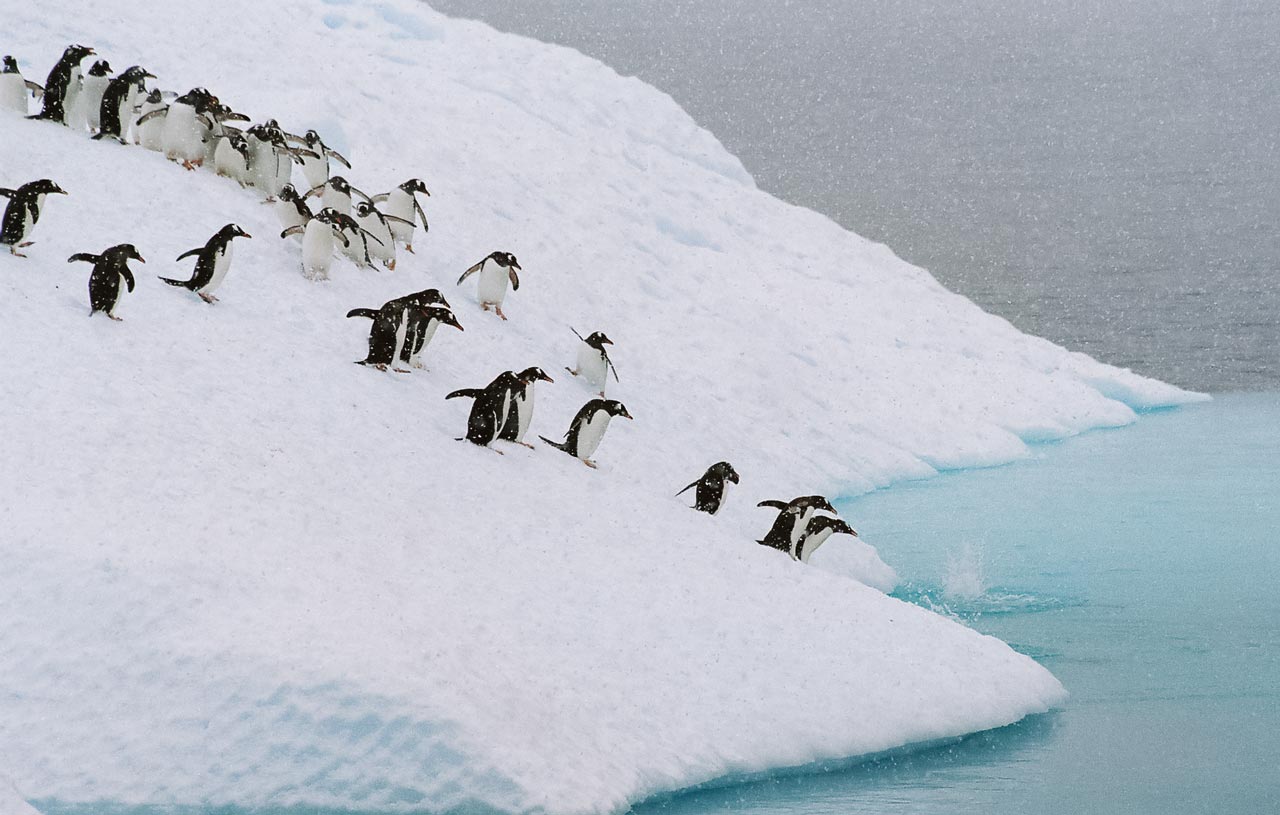 The weather has turned extremely sunny and Antarctica is looking more and more like it does in all the travel brochures. We see the most amazing icebergs and sail past mountains that look as if they were drawn by a small child: almost perfectly triangular and with snowy white tops. Yet another perfect day is concluded this time by a barbecue (!) on deck. In these circumstances it’s hard to imagine being stuck here in winter darkness. The first to do so was the Belgian ship Belgica at the end of the 19th century. It’s legacy can be seen on every map of the area we’re currently sailing through: it is literally strewn with Belgian inspired names: Flandres Bay, Brabant Island, Gerlache Strait, Anvers Island, Lemaire Channel, to name a few.

Since the Belgica countless more people have wintered here. When visiting Wordie House, a former British base (well, shack really) you get a glimpse of how that must have looked like. Cozy, in a Spartan kind of way. You can barely imagine living there and slowly seeing the light disappear as the sun sets for winter and stays away for months. But sometimes the light goes out more suddenly.

Near Wordie House is Vernadski, the only Ukrainian base in Antarctica and the spot where they discovered the hole in the ozone layer. The contrast with the Chilean base Videla we visited earlier was staggering. That one is situated right in the middle of a filthy penguin colony. I don’t know if the station has a motto, but it should really be ‘Shit Happens’ in Latin. That smell! If Dante had known penguin shit, he undoubtedly would have included it in one of his circles of hell.

Compared to this, the Ukrainian base seemed an oasis of cleanliness and efficiency. We had to take our boots of before we were taken on a short tour of the amazingly clean and tidy compound and could post our postcards (which will probably arrive somewhere summer next year). The scientific research done here is probably very interesting and probably very important, but I’ll remember Vernadski for it’s most memorable feature: it has a bar. And not just any bar, but one that sells home-made Antarctic vodka. It took literally minutes before a party took off. Later on, the party continued until deep in the night on board the Europa with some Ukrainian guests, music & more booze.

The lights went out for me long before that. Can’t remember a thing.

Those Ukrainians make a mean vodka! 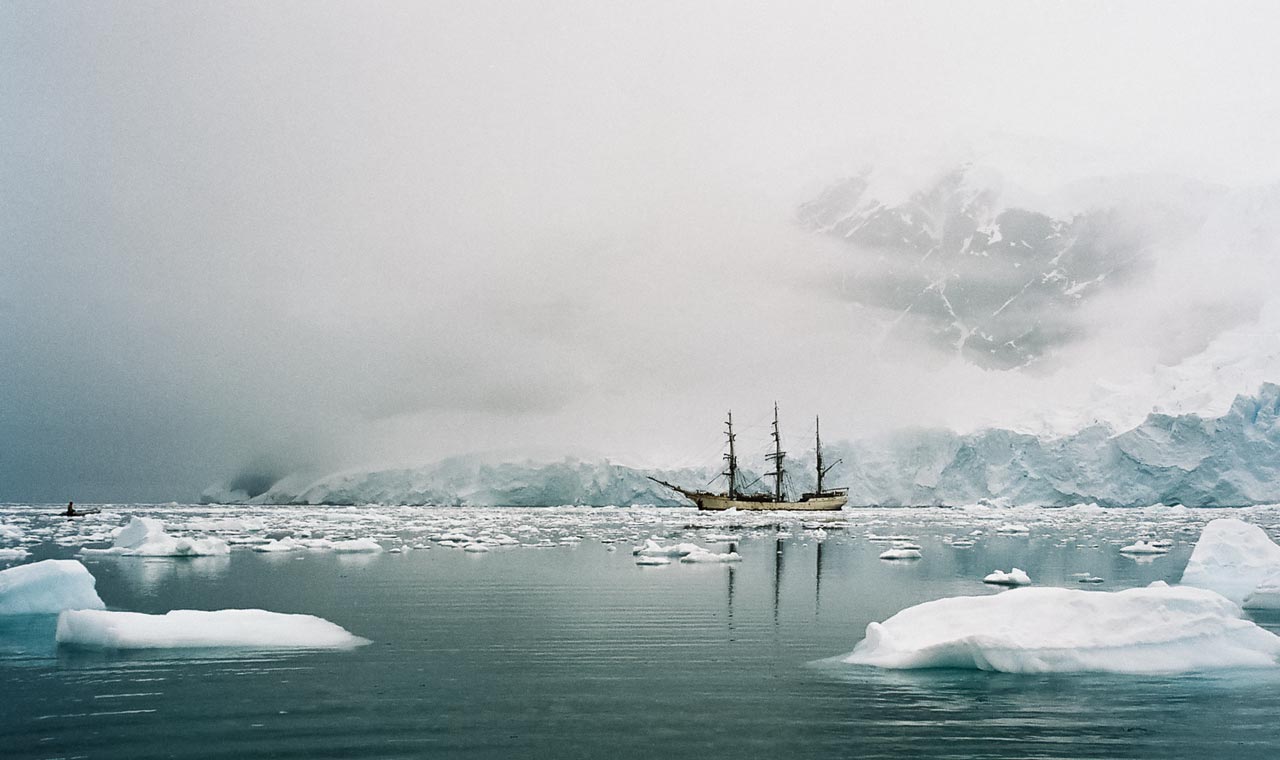 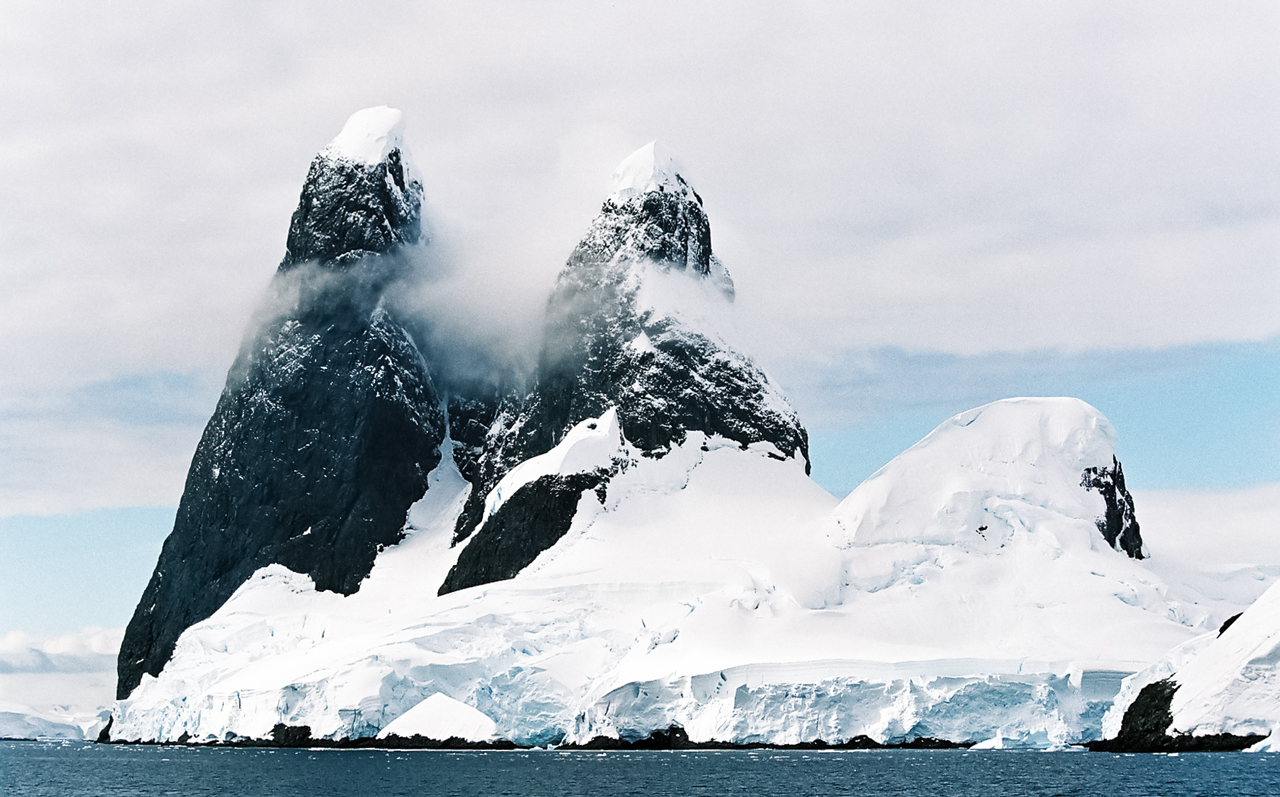 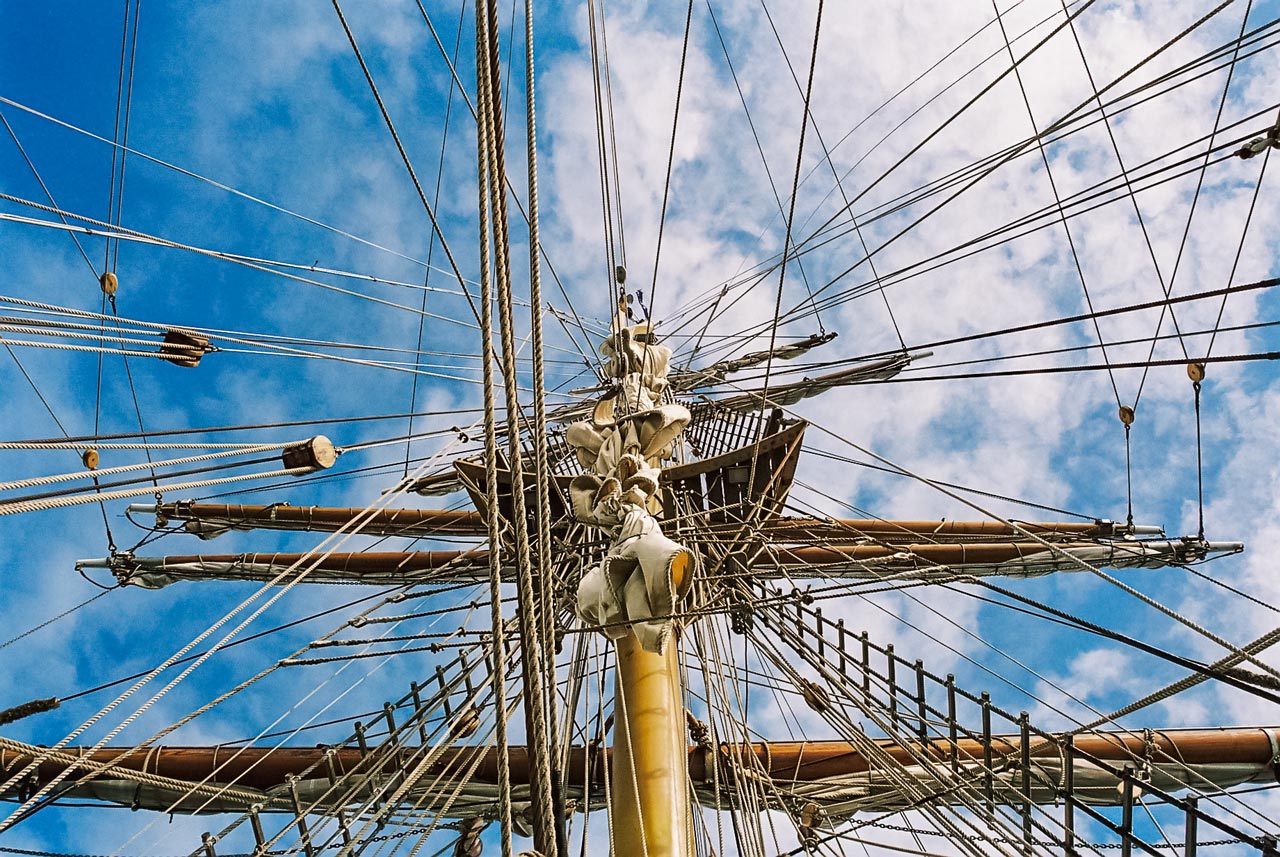 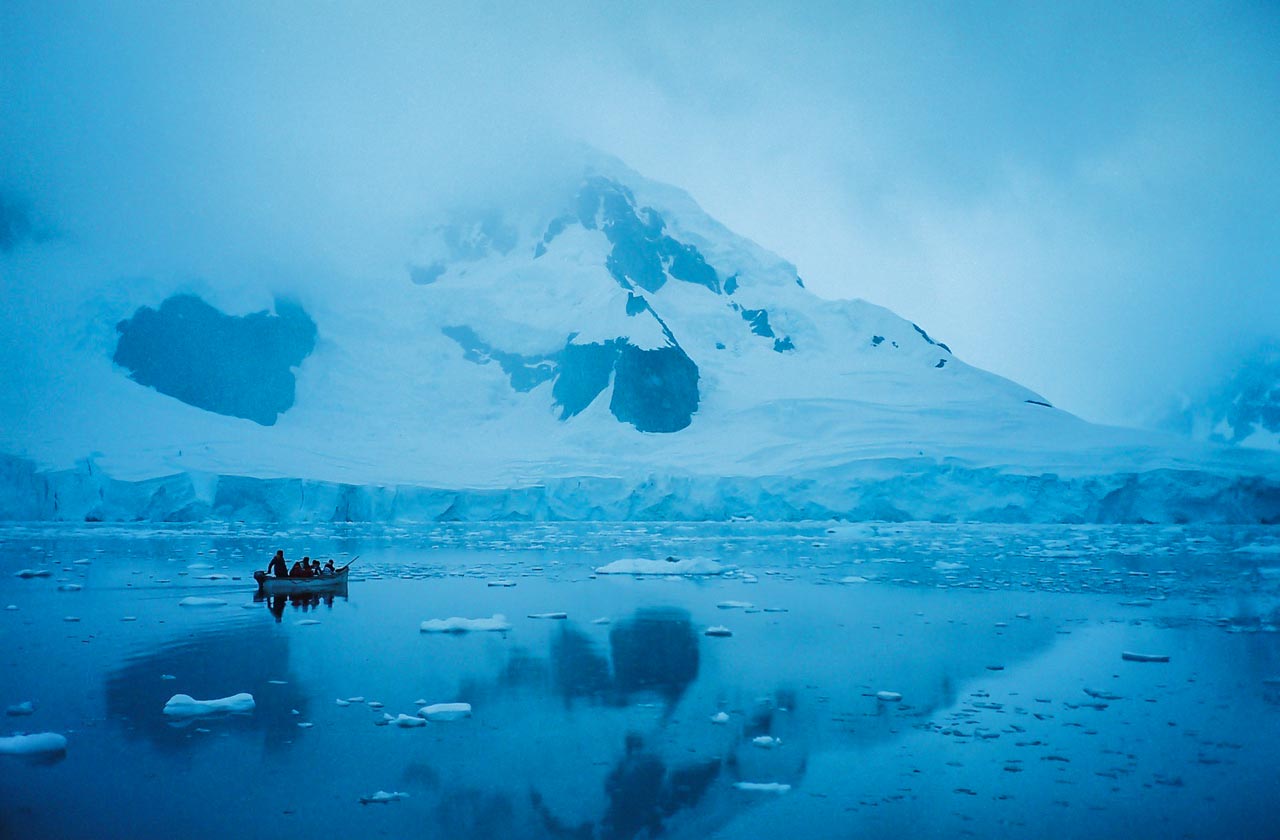 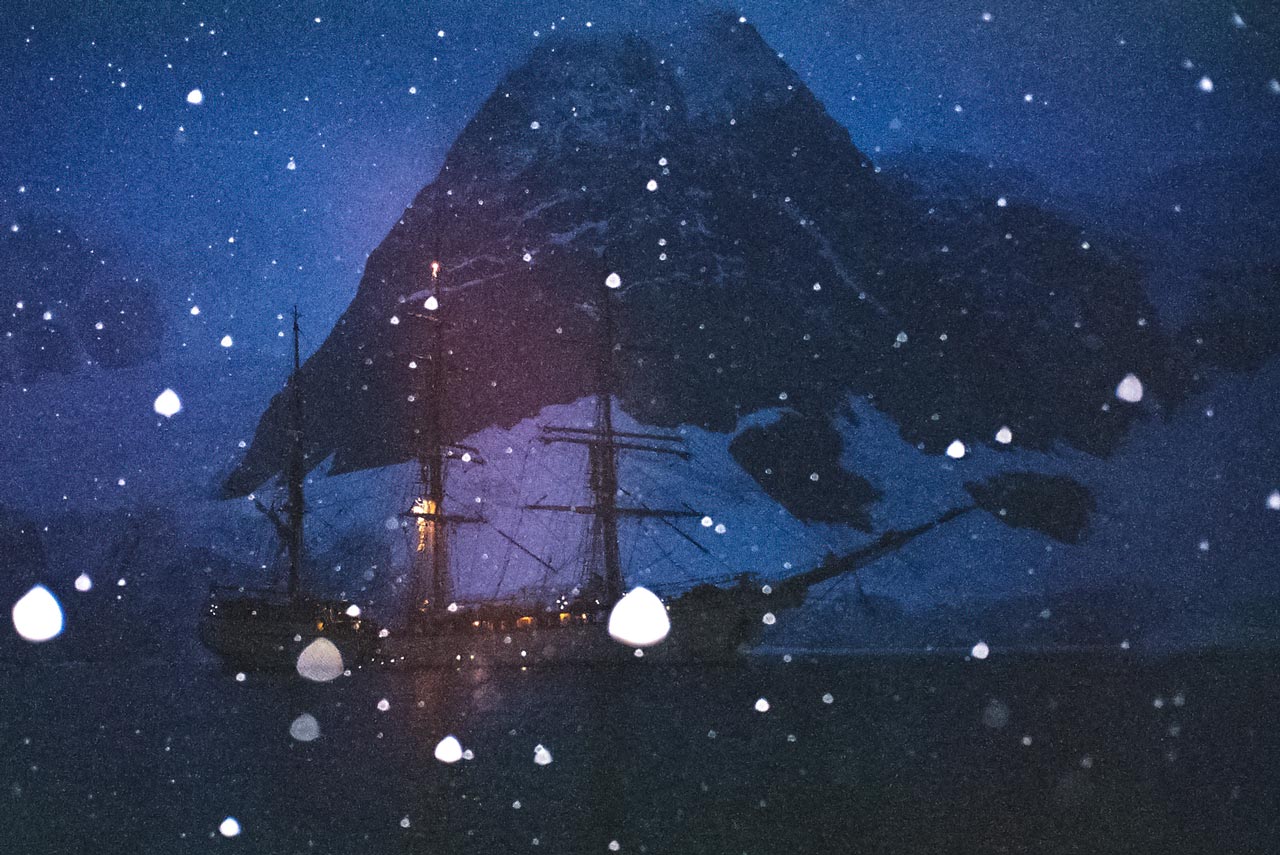 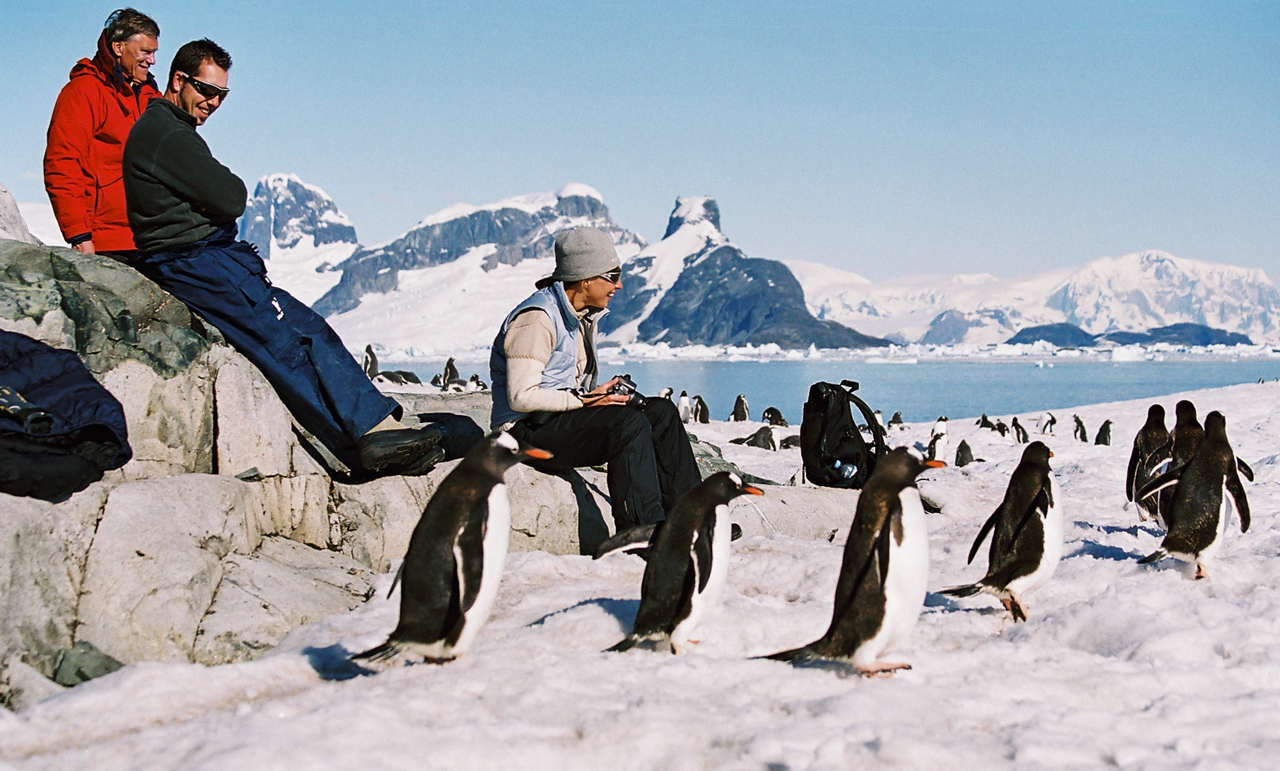 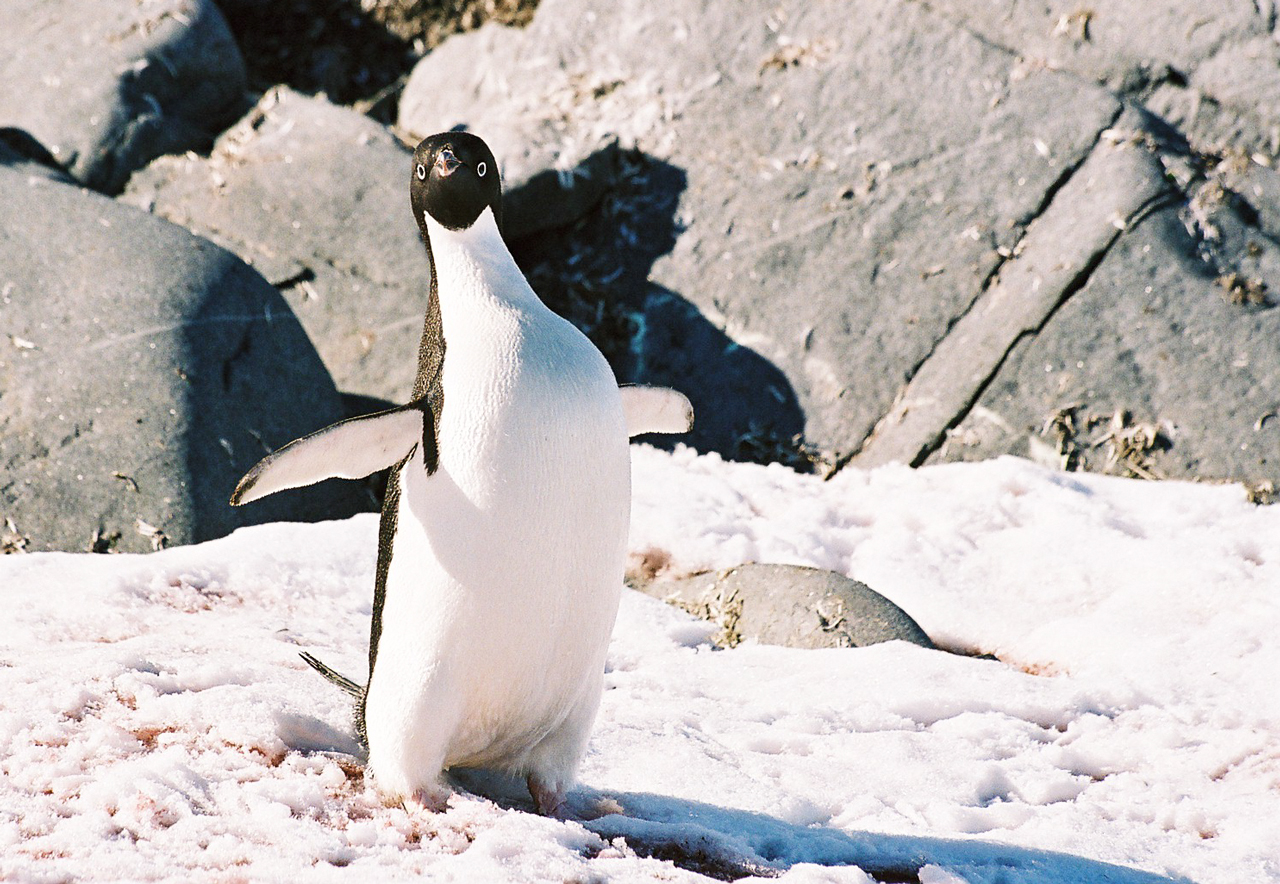 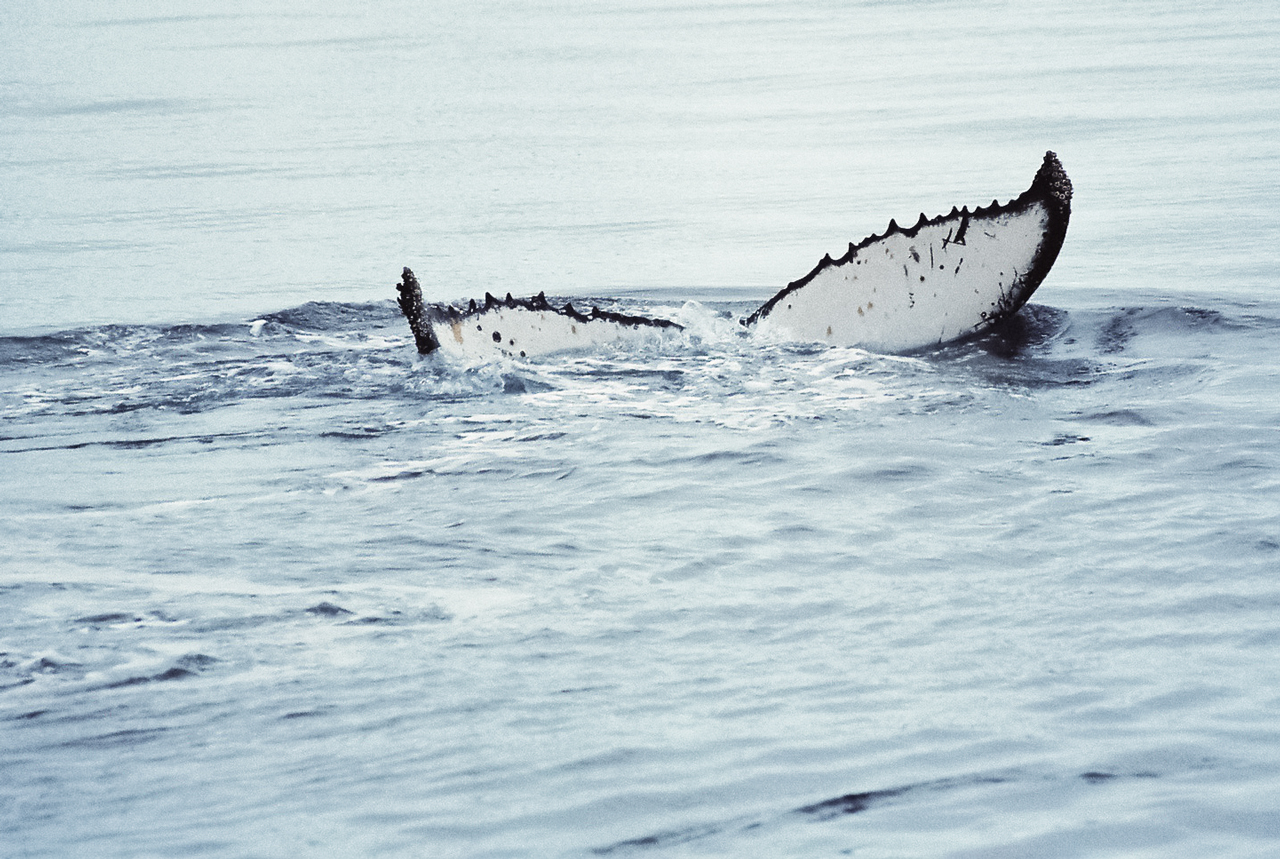 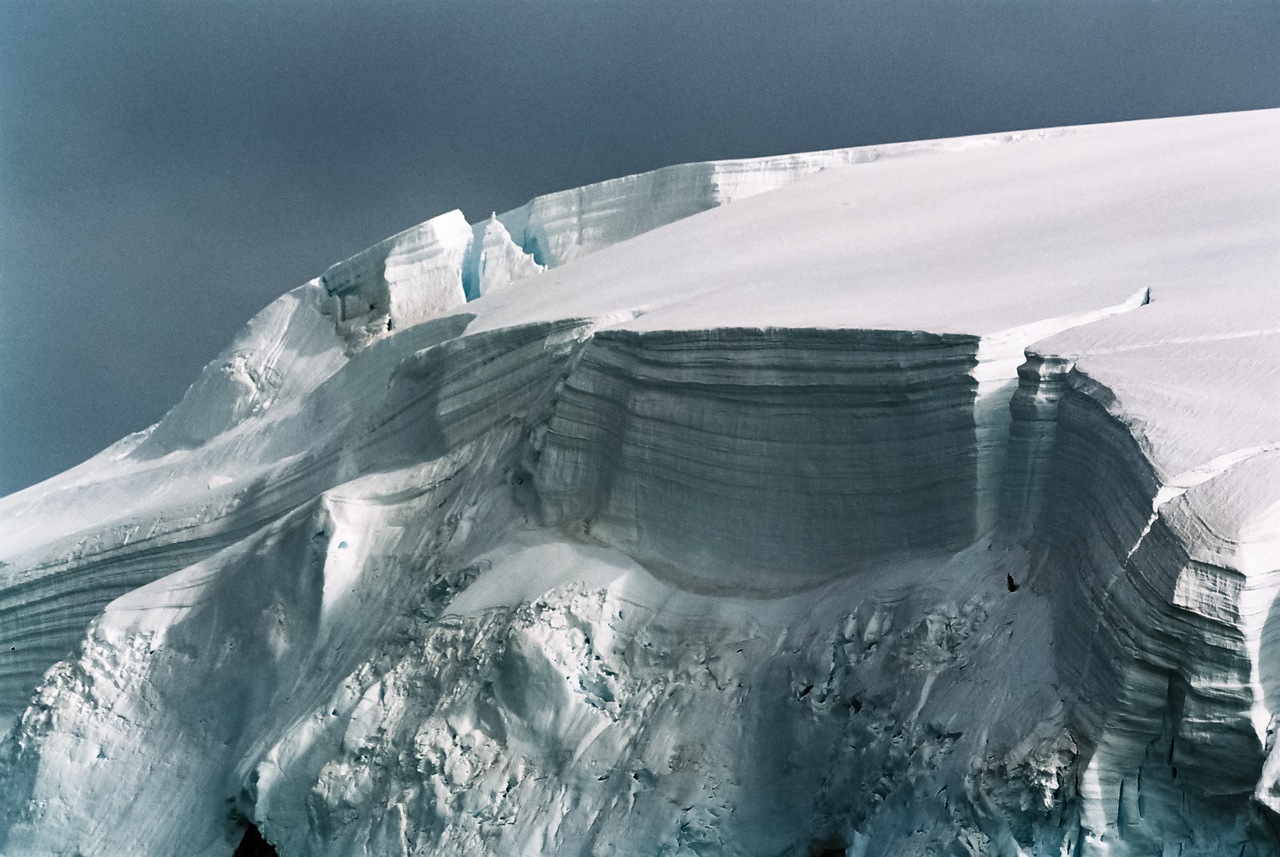 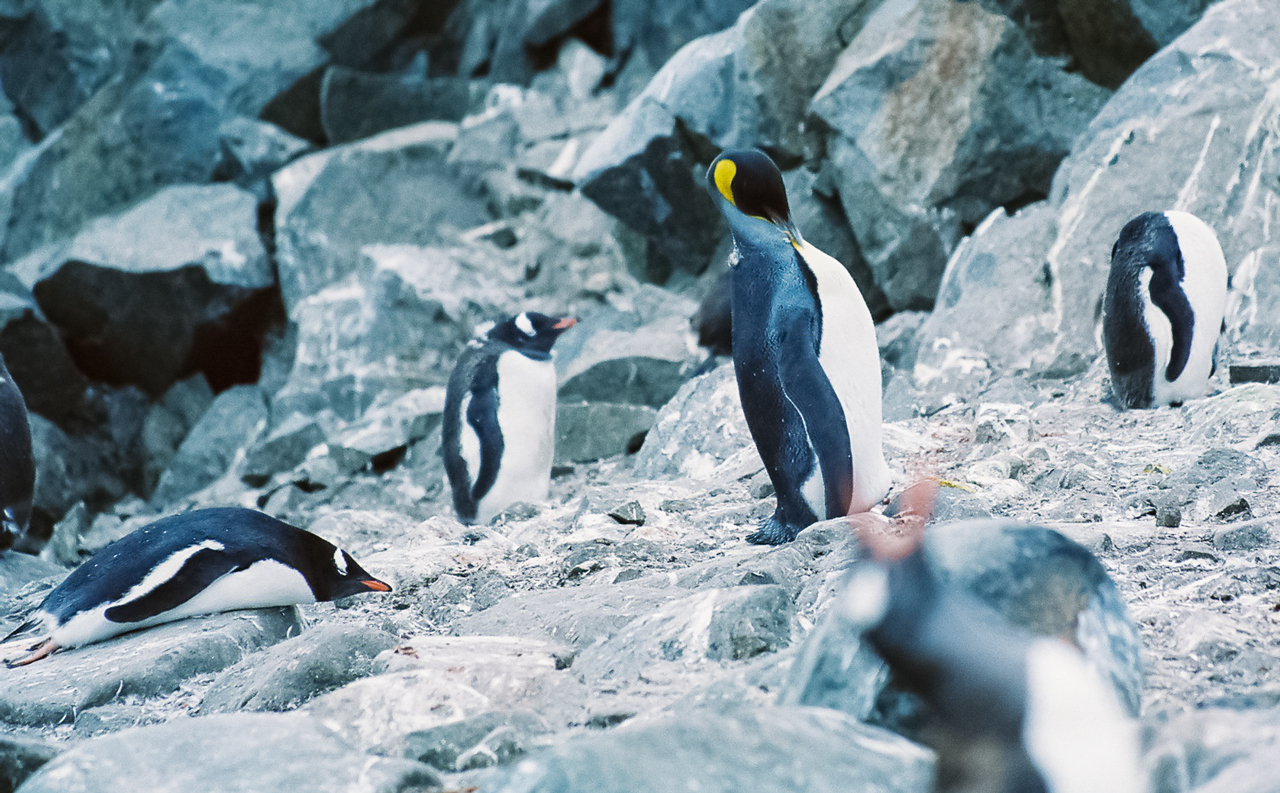 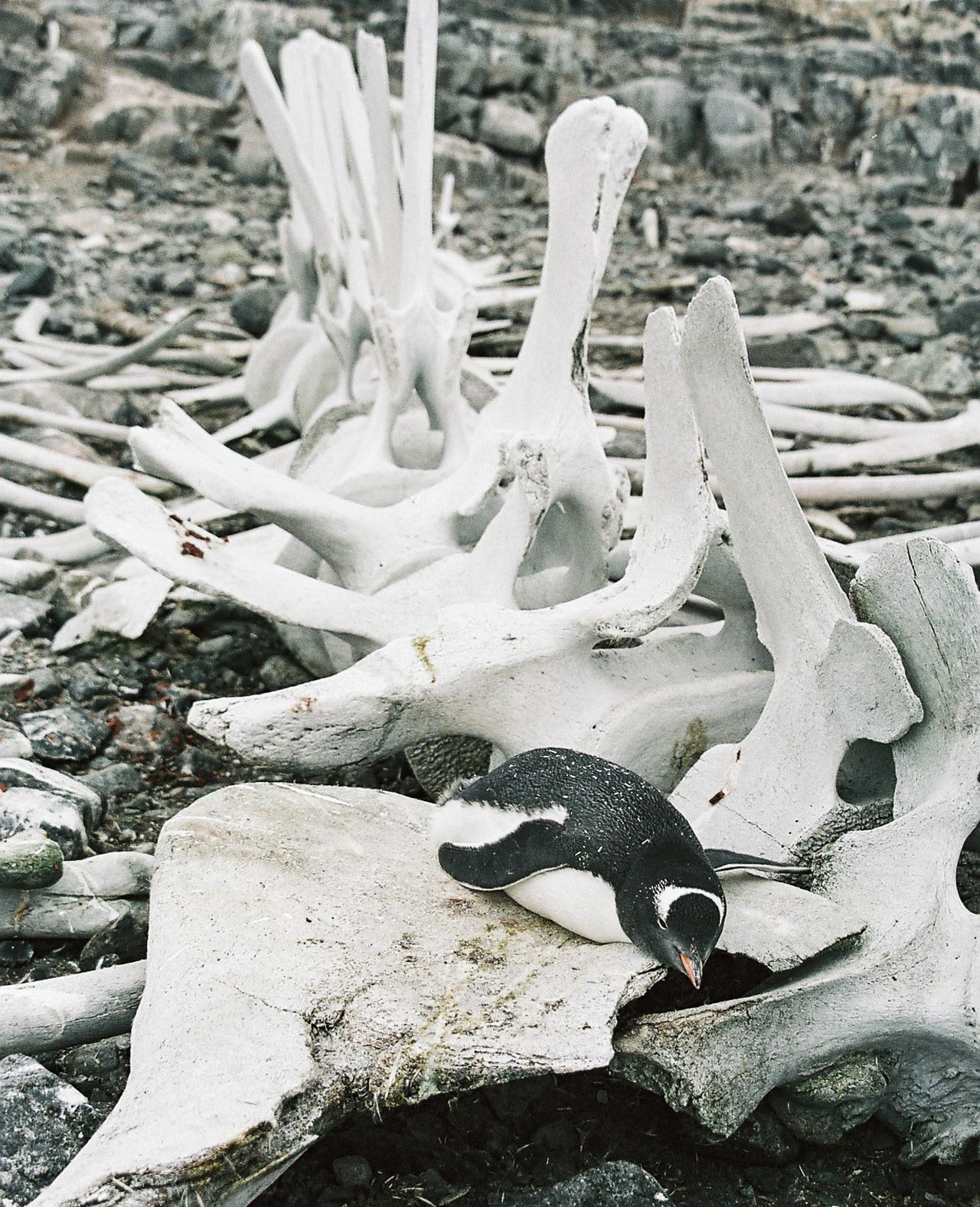 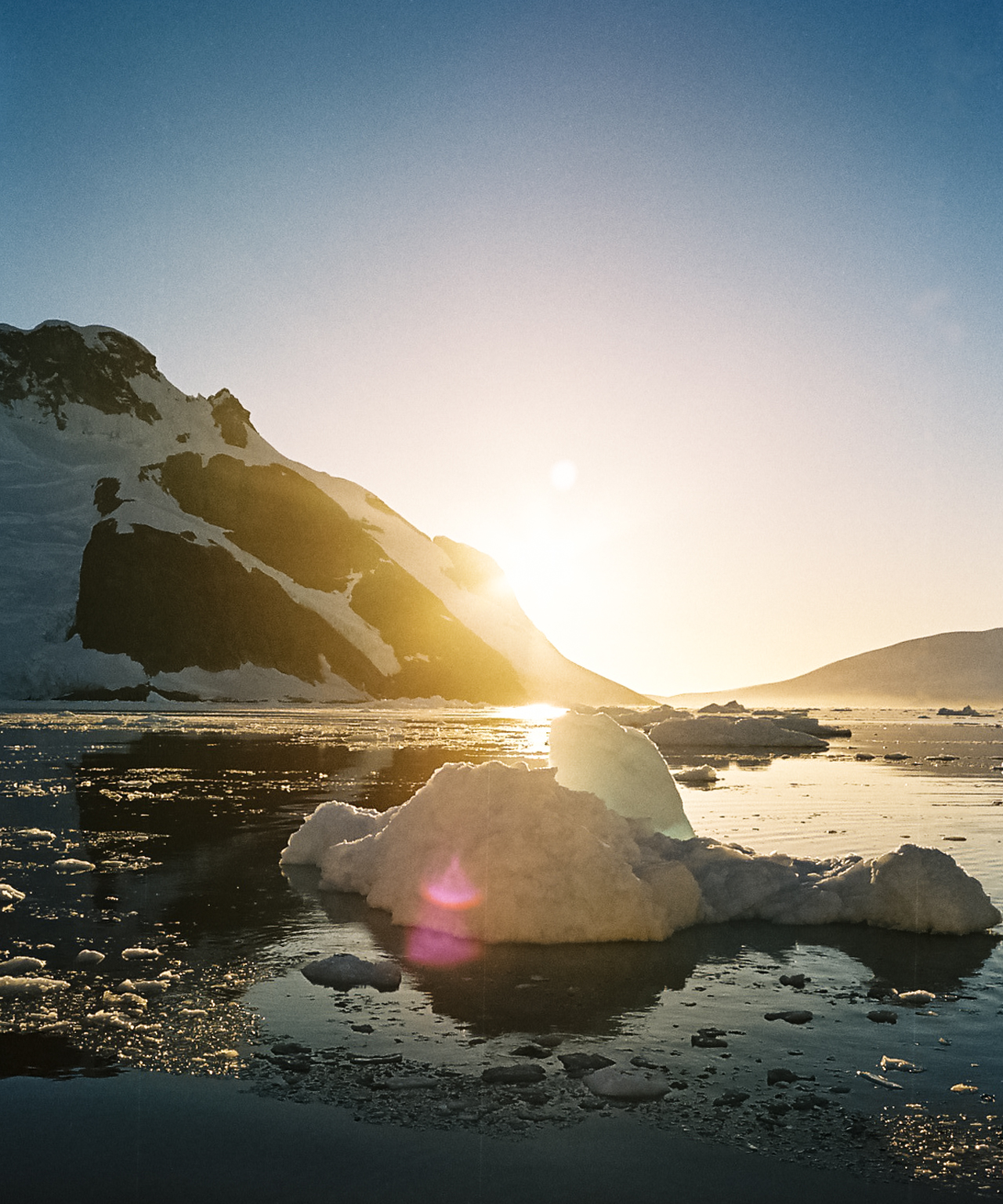 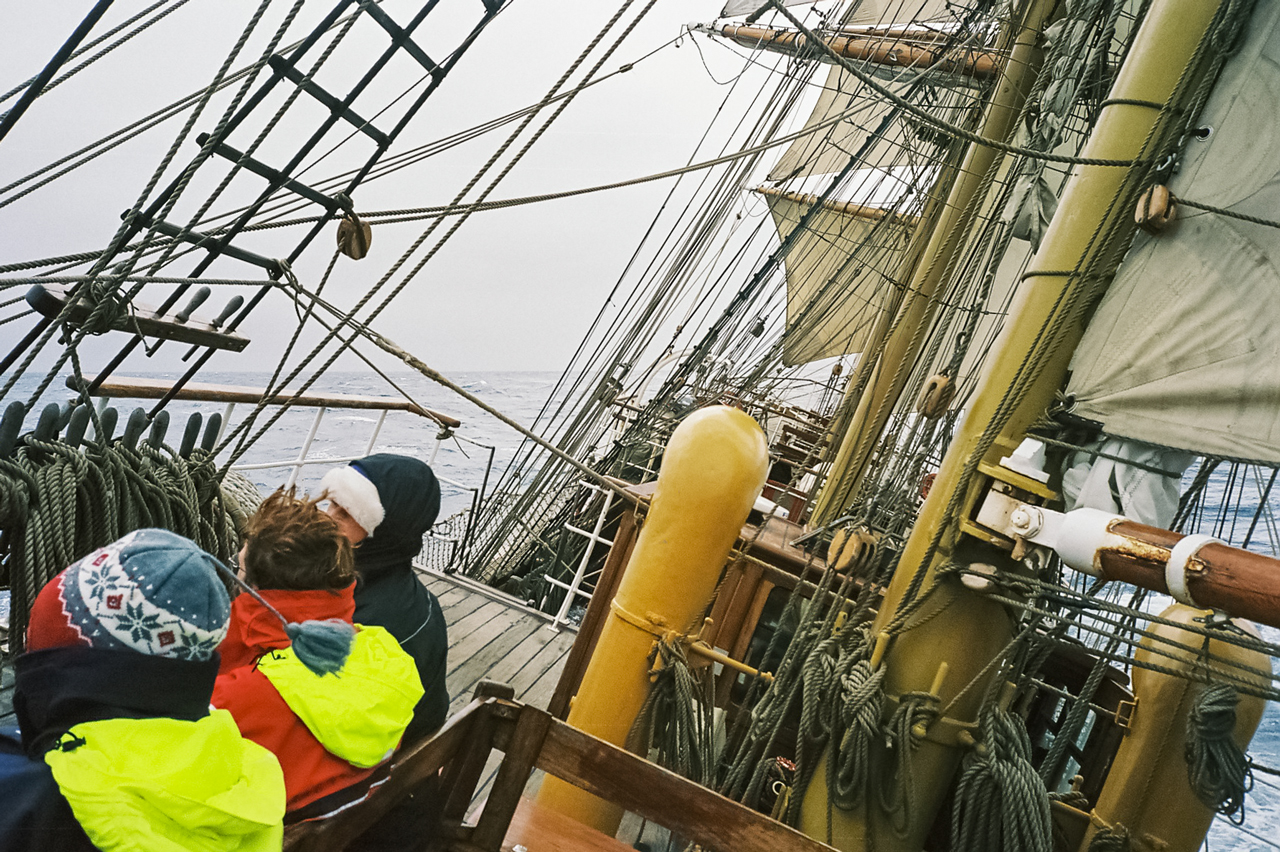 Time does funny things when you’re having fun. On the one hand it’s hard to imagine that the three weeks of this journey are already nearly over, and on the other hand you think about something you’ve done or seen a while ago, when it’s really just been yesterday or even the same morning.

We’re now heading up the Drake Passage – and the start of this crossing looked like one big déjà vu: some were kind enough to feed the fishes with the content of their stomachs, portholes that resemble washing machines, people generally staying in their bunks, and a deckhouse which at times was eerily quiet. Welcome to the Drake Shake!

We’re reaching the end of our journey and you can’t help but looking back. I love going over all those great memories, but I hate the end, the closure it implies.

As with any journey, I started this one with certain expectations. I expected to see jaw-dropping scenery – and that’s exactly what we got. The silence that often goes with it is harder to imagine. It’s almost as if a big blanket has been thrown over the landscape that muffles all sound, only to be interrupted by some noisy animal or the rumbling of avalanches or glaciers breaking up.

Of course I expected to see wildlife, but the amount of species we saw and the show they put on (for us?) was unique and still is unbelievable. There are of course the penguins – bless ‘m. You really can’t comprehend back home what it’s like to see so many up close – or seeing so many species. The prettiest was the most surprising as well: a king penguin at Port Lockroy, when its nearest habitat is at South Georgia, some 1800 km away. And there it was: smack in the middle of Antarctica’s busiest tourist spot. One attention craving penguin!

I expected to maybe see some whales in the distance. What we got was an incredible up-close display of minke and humpback whales – and on multiple occasions as well. We could literally smell the air they breathed out as they majestically glided alongside the ship.

We saw numerous kinds of seals and birds, even giant red jellyfish, so as we were entering the Drake there was really one species (spoiled as we had gotten) most of us regretted not seeing: killer whales. But just as we left the Melchior Islands, our last Antarctic stop, we saw them. And how! Amidst the excited ‘oohs’ and ‘aahs’ from crew and passengers alike, we saw just bits and pieces of what must have been an underwater chess-like battle for live and death between a group of humpbacks and a pod of killer whales. A rare site – and strangely exhilarating in its unseen but imaginable cruelty.

And just when you think that that’s it: no more presents; it’s just days and days of grey rocky sea with the occasional albatross from now on, you suddenly get a group of beautiful hourglass dolphins riding the bow. Unbelievable…

I must say I had my misgivings about being ‘stuck’ for three weeks with 55 persons on a ship 55 meters long. But the atmosphere was just great. It was a mixed bag of ages, nationalities and walks of live. There’s been a lot of laughter onboard. And really, the ship is spacey enough to go about your own business if that’s what you want.

Ah: the ship! Yeah okay: she’s a bit rusty. But every time – and I do literally mean every time – you look at the Europa from a Zodiac or from land and see it lying there in scenery photo nor words can really do justice to, it just takes your breath away. You get your camera anyway and as you look through the viewfinder you feel a bit as if you’re Herbert Ponting or Frank Hurley, those legendary photographers who visually documented Scott’s and Shackleton’s expeditions.

And then there are those countless little things that make this trip memorable. The scorching and freezing dip at Deception Island Beach Club. The scrubbing of dirty boots. Having a full frontal collision with a campervan-sized iceberg. The three bells. The rhythmic Drake-shuffle from port to starboard and back again of a cabin floor filled with boots. The terabytes of photos and video. The giggles you get when you hear nautical sayings like ‘ flaking the chain’ or ‘dropping shackles’. The excellent ‘cleaning up music’ coming from the galley. Rafting with the Zodiac. The scent of fresh bread in the evening. And all those lectures – we’ll all leave the ship with a Ph.D. in Antarcticology!

Which brings me to the crew. Really, the only appropriate thing to do is to get on your knees and chant: ‘We’re not worthy! We’re not worthy!’ When we were merrily walking ashore or boozing away in the deckhouse, they were slaving themselves in every nook and cranny of the Europa: somewhere deep inside the ship making sure we would still be able to flush the toilets; in the at times rollercoaster-like galley making great meals for 55 persons three times a day; up in the yards doing… uhm… the things sailors do up there (sorry, still haven’t gotten the hang of all those nautical phrases); on shore guiding us in the right directions, or anywhere else doing countless little and big chores that make the ship functioning and us ’trainees’ comfortable. And all that with an ease and welcoming feel such as only true hosts can.

Well, if those last remarks don’t get me some sort of discount on my bar bill…

Anyway: it’s been quite a trip – in every sense of the word.